Case Studies » Decide Between Cobra Insurance Or California Health Insurance? What Should You Do? 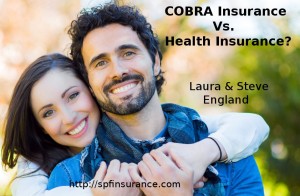 When you leave a job that provides health benefits you become eligible for Cobra insurance. However, your employer may not fully describe how Cobra health insurance works, and what to be aware of. This happened to Laura England and her husband Steve in Oceanside California.

Laura and her husband had Cigna HSA health insurance through his employer-sponsored group plan. When Steve decided to leave his employer and start his own business, they knew it was time to begin looking for other options. Steve’s cost for the Cobra insurance was going to be over $800/mo.

Laura called SPF Insurance on Feb 23, 2016 to get some help finding new insurance plans. She explained that their coverage had ended on January 31st, and that her doctor had recently confirmed she was pregnant. Therefore she wanted to find out if there was better coverage for her pregnancy and delivery.

She said that both she and her husband were healthy, and rarely see a doctor except for yearly checkups. Since they lived in Oceanside California, Laura also wanted to make sure that the two nearest hospitals would be in-network for the birth of their baby.

What Is COBRA Health Insurance California
The Consolidated Omnibus Budget Reconciliation Act of 1985 (COBRA) requires that businesses provide employees leaving the company with the opportunity to keep their coverage.

In both Cal-Cobra and Federal Cobra you are allowed to sign up for Cobra anytime within 60 to 90 days of the time your company-benefit plan ends. The law says you have at least 60 days, and some employers allow 90 days (check with your company). You are not required to enroll.

If you wait 59 days and then decide you want (or need) to enroll in Cobra insurance, you are required to pay back premiums for the full 59 days (retroactive to the date your company coverage ended). Because of this, many people use “the ability to retroactively start Cobra” as a safety-net while they explore their other medical insurance options in California.

If you do enroll in Cobra (either Federal or Cal-Cobra), you will use your Qualifying Event and no longer be able to enroll in regular health insurance through the California exchange or directly with an insurance company. Many employer’s Human Resource departments fail to mention this fact.

Although Steve did not have a doctor, Laura wanted to continue seeing her Ob/Gyn at Scripps Coastal Medical Center in Encinitas California.

Finally, near the end of the initial discussion, Laura mentioned that her husband had enrolled them in Cobra coverage during his exit interview. He didn’t want any gaps in their coverage. His concerns were that they would be subject to a penalty if they didn’t have coverage. Plus they thought she might be pregnant so he wanted to make sure she had continuous medical insurance.

In summary, they wanted to get a great plan for her and basic coverage for him, while allowing her to continue seeing her existing doctors.

Key Issues We Must Address

The important issues in the case were the following:

I knew before the first conversation was over that we had a big problem to address immediately. Without a resolution to the problem, we would not be able to help the Englands.

How To Get The Englands Out Of Cobra insurance?

As mentioned in the sidebar above, once you elect to start Cobra, you lose the qualifying event. The Cobra plan is a simple “continuation” of the group health coverage.

This means there is no “loss of minimum essential coverage due termination of employment status,” and therefore no Qualifying Life Event. The key here is if the Cobra stays in effect for any period of time, then the qualifying event is lost.

Therefore we told them to call the Cobra administrator and ask them to “cancel” the Cobra coverage back to it’s original start date of 2/1/16.

Could They Qualify For Subsidies On Covered California?

As it turned out, the reason Laura’s husband was leaving his job was because he was starting his own company. He had lined up several clients and was ready to run his company full time.

They estimated their Adjusted Gross Income (AGI) for 2016 to be around $80,000. The upper AGI subsidy limit for a couple in California is $63,720 so they wouldn’t qualify for a subsidy.

However, their baby would be born in late 2016, so their household size for their 2016 federal tax return would be three. The upper AGI limit for a family of three is $80,360. Therefore they would be borderline subsidy qualified.

After some discussion, Steve shared that he thought the $80k estimate was extremely conservative and that he expected it to be closer to $100k. Therefore the decision was made to not apply on Covered California and to enroll directly.

In What Networks Do Their Doctors And Hospitals Participate?

From this we know we need to choose medical plans from Blue Shield or Health Net.

What Are The Best Health Plans For Laura And Her Husband?

For Laura’s husband the decision was pretty straight-forward. He isn’t going to go to the doctor no matter what plan he gets, so a Bronze level plan will be fine for him.

Laura, however, will be going through the full 9 month prenatal preventive care, and delivering their baby in the November time-frame. The delivery will be a higher cost medical service. Typically this can cost $12,000 to $16,000 at hospitals in San Diego county.

Because of this cost we need a plan that will minimize her out-of-pocket cost when she delivers at the hospital. This typically means a Platinum plan.

At SPF Insurance we’ve analyzed all the maternity insurance plans that are available in California and list the best options in each region of California.

When we run a set of insurance quotes and look at the Blue Shield and Health Net PPO plans, it becomes immediately clear that Blue Shield’s Platinum 90 PPO will be the most cost-effective plan for Laura. The Bronze 60 PPO plan will be the better option for her husband.

The reason is that the similar plans from Health Net are noticeably higher cost.

When Could Coverage Start? 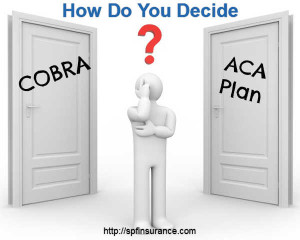 The loss of minimum essential coverage as a result of leaving a job gives some extra flexibility on when new plans can start. In Laura and Steve’s case, as long as we submit applications for their new policy before the end of February, we can get a March 1st start date.

If we wait until after March 1st to submit the application then the soonest the plans could start would be April 1st.

Which Plans Will Cost More?

Laura and Steve currently have a Cigna HSA 3000 Silver plan from his former employer. This plan will cost them just over $800 per month. The Cigna HSA has a $3,000 deductible and an additional $2,000 to reach the out-of-pocket maximum of $5000.

If they stayed the in California Cobra insurance, Laura’s delivery costs would be fairly high. When she went to the hospital to delivery their baby, she would have to meet the $3,000 deductible first. Then she would begin sharing costs with Cigna were she pays 30% of all additional expenses until she has paid $2,000 more.

In the Blue Shield Platinum 90 PPO plan Laura would have no deductible, and would immediate share costs with Blue Shield where Laura paid 10% and Blue Shield paid 90%. If the Hospital delivery costs were $14,000, then Laura would pay a total of $1,400 for the birth of their baby.

With all the information collected at that point, I was ready to make my recommendations.

The Final Solution For The England Family

Fortunately Laura called SPF within the first month they had Cobra. The Cobra Administrator agreed to cancel the policy so that it was never in effect. If Laura had waited to call us until March 1st, we might not have been able to get the Cobra plan cancelled.

Now we could enroll in plans that were more suitable for what Laura and Steve needed. We did the application directly with Blue Shield, using the “Apply Now” buttons inside the quotes we provided to the Englands.

Laura signed up for the Platinum 90 PPO plan, and her husband enrolled in the Bronze 60 PPO plan. The combined cost of both Blue Shield plans was $795.50, so they saved a little bit each month compared to the $800+ Cigna Cobra insurance. The biggest difference is in the $3,600 in out-of-pocket savings by using the Platinum 90 plan versus the Cigna HSA plan.

We got a copy of the Cobra eligibility letter that was sent to the Englands, and included that as their proof of Qualifying Event. In both applications we requested a March 1st start date.

Blue Shield approved the application within a week and did give Laura and Steve a March 1st start date.

Lastly, we coached the Englands on how to get the baby enrolled shortly after birth in the November time frame.

Key Take-Aways From The Case Of Cobra Insurance California

If a medical emergency occurs before other health insurance begins, you can quickly signup for Cobra and retroactively pay the premiums back to the date your employer coverage ended.