President Obama has said many times, “If you like the plan you currently have, you can keep it.” After the cancellation letters arrived, the administration changed the story and justified the cancellations because the cancelled plans offered “poor coverage.” In many states this may be true, but in California our health insurance market is highly regulated by the department of insurance, so our plans are required to have better benefits than most other states.

Are our cancelled California plans providing “poor coverage?” Why are the plans being cancelled on December 31st, instead of on the annual renewal date which is what the ACA says? The answers are pretty interesting.

Simple probability says that if you increase the number of people required to enroll, the the odds are that more people will enroll on Covered CA. That’s why your policy was cancelled.

The Obama administration decided to justify the discontinuation of your health plan by saying that most plans provided “poor coverage.” But they did not define what poor coverage was. Should you be glad that your low-cost health plan was cancelled so you can sign up for good coverage at higher prices?

As you heard Obama say in the video, “You’re going to get a better deal.” Let’s see if that’s true by comparing one of the popular current plans with a Bronze plan on the exchange. We’ll compare benefits and prices using a couple in Orange county that is 46 and 50 years of age (this is an actual client example).

The Health Net PPO Advantage 3500 plan has been very popular for the last 1.5 years since its introduction in California. This current plan is one of the lowest cost plans in most of California. 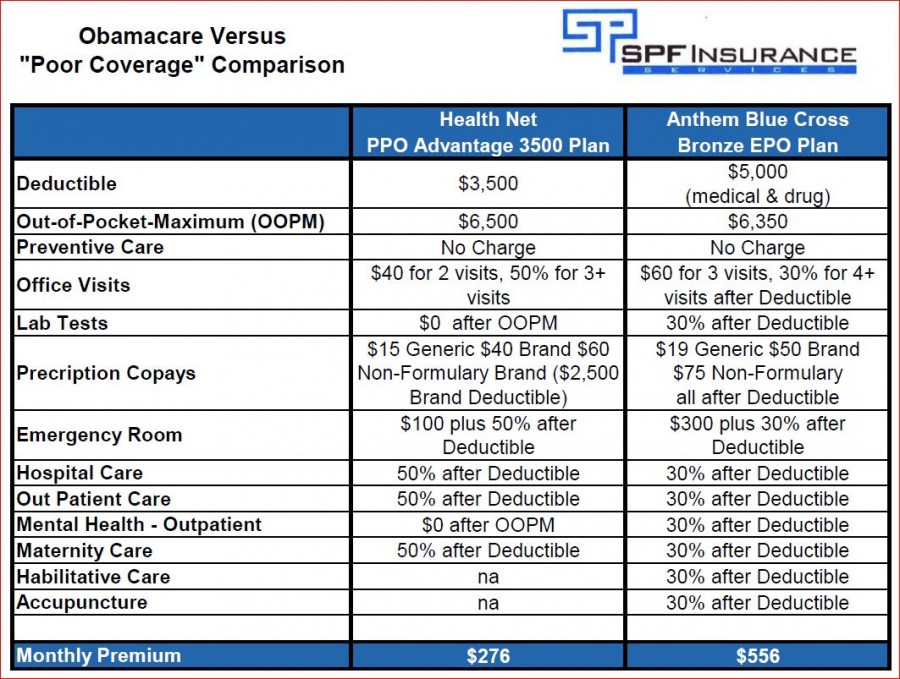 In Southern California, the Anthem Blue Cross Bronze DirectAccess EPO plan is the lowest cost bronze plan available. Comparing this Bronze plan to the current Health Net plan we can quickly see there are many similarities. Both have an out-of-pocket-maximum of either $6,350 or $6,500, both offer 2 or 3 doctor visits with just a simple co-payment, and most other benefits are available after you reach the plan’s deductible.

Finally, the current plan provides no coverage for acupuncture and habilitative care, and the co-insurance is 50% versus the Bronze plan with a 30% co-insurance.

Based upon the comparison above, both plans appear to be equal in overall medical value. In a worst-case scenario, the most an individual would pay for medical expenses in a year using either plan is just $6,500 or $6,350. However the monthly premium for the two plans is dramatically different. The current plan costs $276/month for the couple, and the Bronze plan costs $556/month. The Bronze plan costs 100% more, but provides the same benefit levels.

This makes the Obama “poor coverage” excuse sound pretty lame here in California. We have plans today that are just as good as the new health care reform metal plans. Obama and his administration were speaking in generalities about poor coverage, and many states do have plans with lower medical value. However, California is not one of them.

As you can see, it’s important to take what you read and hear in the media, and filter it based on what reality is here in California. We don’t have “poor coverage”, the health plans we have now are equal to the new health care reform plans. The insurance companies and the ACA didn’t cancel your plan, Covered CA cancelled your health plan. Many times, things you read about health care reform won’t apply here in California because of state regulations or Covered CA rules. Having a local authority you can turn to is important.

Let SPF Insurance be that local expert for you.

What You Need To Know About Health Care Reform