Annual family health insurance premiums rose about 4 percent to $15,745 in 2012, according to the latest survey by the Kaiser Family Foundation and Health Research and Educational Trust

Now that's a fairly modest increase by historical standards, and well down from last year's 9 percent. Still, it's more than double the 1.7 percent increase in average wages and way above the 2.3 percent rate of general inflation this year.

In terms of employee insurance costs, this year's 4 percent increase qualifies as a good year, but it still takes a growing bit out of middle-class workers' wages, which have been flat or falling in real terms," said Kaiser President and CEO Drew Altman.

This 4 percent increase is the average increase across the entire US for employer sponsored health plans.  In California the average change for individuals and families purchasing their own health insurance is more like 12-13 percent (this comes from the average rate increase received by clients renewing their policies after July 1st).

For families this increase is significantly higher than the rate of inflation and any pay increases they received this year.  However, California families pay significantly less than what people in other states pay.  According to StateHealthFacts.org, Californians have the 2nd lowest monthly cost for health insurance at $157, and Massachusetts has the highest premium at $437. 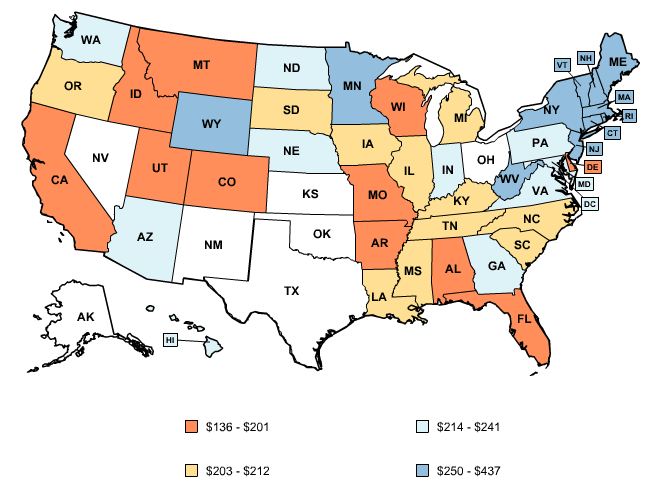 Currently, Massachusetts requires that everyone in the state have health insurance, so only 5 percent of the population does not have coverage.  Weren't rates supposed to go down if everyone was covered?

According to most pundits, things will only get worse between now and 2014 when the Affordable Care Act kicks in.  In 2014 there are many new benefits that all health plans must offer, so that will increase premiums.  Nobody is sure how much the rates will go up, but some projections are the increases will be 20-30%.

President Obama’s claim that insurance premiums ‘will go down’

A nationwide study conducted by Milliman Inc. for the Society of Actuaries found that nationwide the premiums in the individual market would increase from 8 to 37 percent in 2014 — with a cumulative increase of as much as 122 percent between 2013 and 2017.

Other studies have shown similar types of cost increases.  However, the key to understanding the difference between the cost increases shown in studies and the cost savings claimed by administration officials, is to pay close attention to the wording.  Obama and his administration are careful to describe the savings as being lower than they would have been without the Affordable Care Act (ACA) at some point in the future.  Whereas the studies show price increases relative to today's health insurance rates.

These two diverging claims are not mutually exclusive.  Meaning they can both be true.  The cost of health insurance can go up by 8 to 37 percent in 2014, and still be lower in cost 10 years from now than it would have been for the same coverage without health care reform.  So let's take a look at the reasons why this can occur.

Many of the cost increases associated with health care reform are due to the new "Essential Health Benefits" that all health insurance plans must cover in 2014.  Many of these new benefits must be added to the plans that businesses and individual have today, so the cost for these new plans will increase in the short term.

The two next largest cost factors for the new 2014 health insurance changes are the inclusion of people that have health problems and the addition of new taxes and fees to help pay for ACA.  These new insurance company taxes and medical device fees will be passed through to consumers, and the added healthcare costs for people with existing conditions will also be paid for with increased premiums.

Ten years down the road, we may find that the whole of ACA health care reform could, in fact, slow down the cost increases for healthcare such that what we pay for these rich benefit plans in 10 years may be less than what we would have paid for these plans had health care reform not taken place.  Projections about what the future 10 years from now will look like are always fraught with error, even looking 1 year out is questionable but usually more accurate than long-range predictions.

The initial whispers coming from health insurance companies is that the new plans and rates will be a shock to consumers next fall during the initial enrollment period that starts in October of 2013.  The letters telling existing health insurance consumers that they are being transferred into the new exchanges and mapped to new metal plans – Bronze, Silver, Gold, and Platinum – will be a surprise, and the rate increases they see in the letter will be shocking.

Stay tuned for more details on this in the next post.