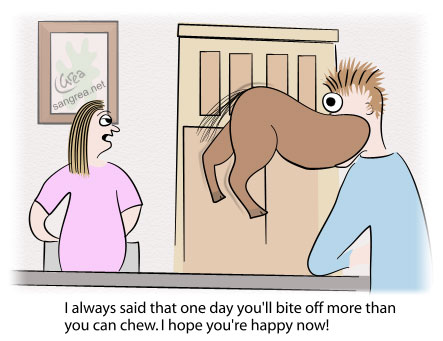 As a type I diabetic I applaud the idea of enabling everyone to buy regular health insurance without the fear of rejection.  I eagerly await the ability to buy the same insurance plan as someone who is healthy.  But as a citizen of the USA, I worry that we’ve bitten off way more than we can chew on, and we’re hiding the true enormity of that bite under a tablecloth (a napkin seemed too small for this analogy). So here’s my take on the worse parts of Health Care Reform plan.

* Medicaid is a federal and state government program that provides free health insurance to low income and disabled Americans.

Other items that did not make the top 10

These didn’t make the top 10, but definitely contribute to the difficulties we face with the implementation of the Affordable Care Act.

As you can see, this list contains some large issues that must be corrected for Health Care Reform to have any chance of success. This does not mean that we should throw out the Affordable Care Act.  Rather we should fix the flaws in order to keep the many good things included in the bill — see the previous post “Top 10 Reasons To Like It” for more details.

The biggest drawback of Health Care Reform is that it will expand the US budget deficits greatly. This increase can not be sustained without cutting other programs or raising taxes (aka increased costs for us).  The various “fees” and taxes that are imposed on companies and products don’t ultimately get paid for by the companies.  They get passed to us through higher premiums and product costs.  So in the end, the politicians have crafted a plan that they can say does not raise taxes on citizens.  But the reality is that it does, and they know that.

The false hope in this reform package is that it does virtually nothing to reduce health care costs, but imposes numerous “fees,” taxes, additional benefit, and administrative costs that will simply be passed on to the consumer in increased premiums. So with no further changes in the reform bill, we will get increased government spending and increased costs for every person in the US. This was not the goal of health care reform, but is what we will get if ACA is not modified.

The expansion of Medicaid enrollment is potentially the biggest ticking bomb in the ACA.  The network of physicians that will accept Medicaid patients is getting smaller each year.  This is primarily because the reimbursement rates paid to the doctors is not keeping up with the costs of caring for these Medicaid patients.  So doctors stop taking new Medicaid patients to enable their practice to survive.  With millions of new Mediaid patients joining the system, where will they find doctors?  How much more will the Medicaid system cost if the doctors were paid the same amount as Medicare doctors?  How can we afford that extra expense, given the budget deficits the US currently has? These are the questions our elected officials need to answer.  The dilemma they face is that Medicaid enrollment is expected to increase by over 14 million people in 2014, at a cost of almost $95 billion according to the CMS 2011 Actuarial Report On The Financial Outlook For Medicaid

For a good resource about what the Affordable Care Act does, visit The Kaiser Family Foundation piece : Summary Of New Health Reform Law.

The pros and cons of health care reform will take several years to work through. Until then we have to adjust to the changes that are coming. SPF Insurance will keep you informed about these new adjustments as they occur, and before they start to affect your life.

So stay tuned for more.